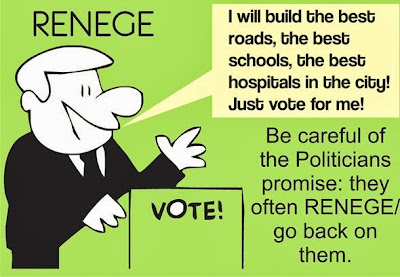 These are the eternal carrots:  promises to fix important, longstanding problems public officials hold in front of voters to get them to approve new taxes and rate hikes.
Almost six years ago, before voters approved a $77 million sewer bond and rate increases to pay for it, the City of Columbia promised $4 million to replace so-called "private common collector" sewers that are ancient and poorly maintained.

But city officials broke that promise, holding it for the next time they wanted money.  Now, the promise to fix private common collector sewers is back, if only voters will approve a $32.5 million sewer bond and rate hike Nov. 5.

That's over $100 million in new sewer funds since 2008.   And yet, thousands of sewer users around Columbia still suffer from basement backups and stormwater floods.   Public officials know that once those problems go away, so does their ability to make voters pay.   It's one reason they keep ignoring retired city sewer superintendent Bill Weitkemper, who can't understand why the City Council, city manager Mike Matthes, and public works director John Glascock don't really want to fix anything.

Like most people, Mr. Weitkemper doesn't appreciate the politics behind tax, fee, and rate increases.
Until this publication challenged Columbia Public Schools about its longstanding promise to install air conditioning in older buildings, Superintendent Chris Belcher was preparing what we called "The Big Renege."   He's finally getting the job down, but only after constituent blowback over the spectre of another broken promise.

The city's big renege started with this promise, reported in Jan. 2008:

"The sewer-collection portion of the ballot issue includes $4 million dedicated to rehabilitate existing sewer mains and manholes with the goal of stopping extra water from entering the system.  The provision also would eliminate private common collectors in the city.

"Fourth Ward Councilman Jerry Wade said private common collectors in his southwest Columbia ward are a problem because most people don’t know they have a private sewer until it fails and they have to fix it.  Funds in the ballot will help eliminate these private sewers by allowing the city to accept them into its system."

"Columbia voters will be presented with a $32.3 million bond issue on Nov. 5 that would include about $3.9 million to eliminate a pesky relic in the city's sanitary sewer infrastructure:  Private common-collector sewers, which the city has identified as a culprit in deteriorating performance of the entire sanitary sewer system.'"

But the real "pesky culprit" in the deteriorating sewer system is the ongoing lie city officials will fix it.   Like a bad Friday the 13th sequel, the lie will keep coming back until it stops making more money.