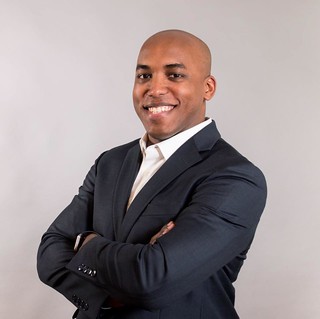 
"Boone County’s a great place to live," he told a crowd of roughly 25 people.  "When we got out of the military, we could have gone anywhere. But we came back here because this is our home...and we want to make it a better community.  There are a lot of ways to do that."

A Marine Corps Veteran, Seamon has a wife, Nicole, and two children.  He will face incumbent Presiding Commissioner Dan Atwill in November.
PROACTIVE, NOT REACTIVE

Boone County's leadership "is not being pro-active," he said.  "They’re reacting to issues as they come along."

One recent example:   "Boone County admitted they lost over $45,000 to a fraud scheme...that was not complicated, but simple," he said.   "I don’t know how many people in this room make over $45,000 a year, but it’s a considerable amount of money to lose.
"That’s not how we do things.  Not how we did things in the military when I was there; not how we do things at my current job with Veterans United.  We try to be proactive. We try to deal with issues before they arise."
A ROAD AHEAD 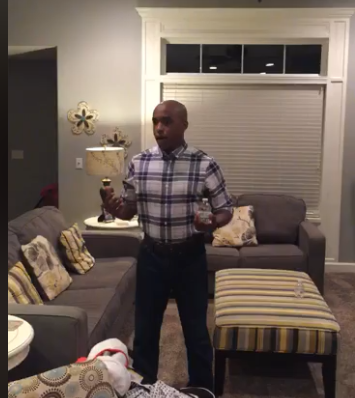 2)   Work with instead of against Boone County's cities, including Ashland, Centralia, Hallsville, and Columbia.  "Right now, we have a plan for the Fairgrounds that would actually take away from Columbia," he said.
3)  Better communication and coordination with other stakeholders like Mizzou.  "The University is the lifeblood of this community.  There has to be an open line of communication between city, university, and county.  What if your brain and heart didn’t communicate?"

4)  "Commissioners can and should use their positions to lobby: the Governor, the General Assembly," Seamon explained.

In a swipe at his opponent, lawyer Dan Atwill, "You can’t just hide behind your office or go to your law firm and take meetings there and hope nobody knows where you are. You gotta get out and actually talk to people."
5)  Address under-employment.  "Unemployment here is low. What we have that’s high is UNDER employment. We have people with masters degrees, doctorates, and they can’t find meaningful employment."

6)  Efficient budgeting -- instead of tax increases. "A tax increase for more police and a larger jail is so unpopular it should be a last resort," the Democratic candidate explained.  "We need to look at current budgets and find out what we already have.  There are a number of places where we have more money than we really need."

More money than we really need?  Where?  "The 911 Fund.  When we instituted that tax in 2013, it cost $2.7 million to fund the 911 Center.   We now have a dedicated tax that raises $9 million.
"Something like diverting those excess funds to the Boone County Sheriff’s Department would have to be put on the ballot." 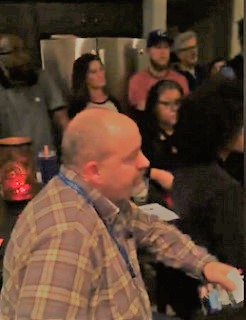 7) County governments have no legislative authority over marijuana, but, "I am pro-marijuana legalization," Seamon explained.  "I don’t think people should have to spend time in jail, or have their lives ruined, or their ability to provide for their families just because they got caught with a bowl of pot."

"If you gave somebody $100,000 a year to manage your life and your money, would you be okay with them doing that work as a part-time job?" he asked.  "County Commissioners make about $100,000 a year in taxes we pay, and yet they treat it as a part-time, twenty hour a week job. We are suffering because of it.

"I’m running for each and every one of you," he concluded. "We deserve a better County; we deserve better representation that, to be quite honest, isn’t hiding from us."