FORUM FIREWORKS: CoMo Council candidates spar with audience, each other 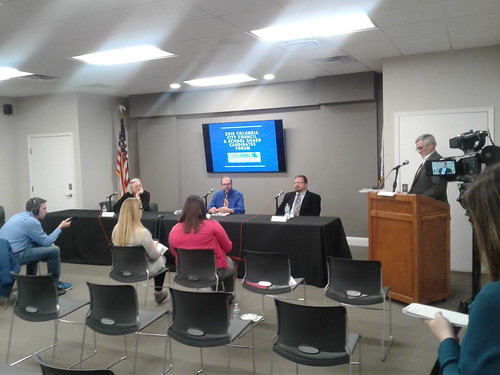 In a devastating assessment of the Columbia Police Department to which he belonged until recently, Columbia Board of Realtors president Sean Moore delivered the night's most powerful pleadings.

An audience member called out Mr. Trapp and Sixth Ward Councilwoman Betsy Peters (running unopposed) for their votes to spend $1.1 million from the city's General Fund, used for public safety, on a new park at the corner of Providence and Broadway.

"You should have used Parks money for that," she explained, elaborating on "the promise" public officials make when they collect taxes for specific purposes.  "How can we trust you with our money if you don't do what you promise?" she asked. "I'm hurt by what you did. I'm personally offended."

Mr. Love was "astonished" that a few minutes earlier, both Mr. Trapp and Ms. Peters said they wanted to raise property taxes to pay for more police.  That suggestion brought audience groans several times during the debate.

Love criticized the park for its location near a "well-known homeless camp," and a cost that "will probably hit three million dollars. For one thing, there's a building on the property that's full of asbestos."

Sounds from the audience indicated many people could not understand how City Hall could spend taxpayer money so freely, on everything from the park to the $5 million in tax giveaways Broadway Hotel owner Dave Parmley has received in two TIF incentives.

Moderator David Lile wanted to know why Mr. Trapp and Ms. Peters supported Parmley's second TIF when every other public deliberative body -- the TIF Commission, the Library Board, the School Board -- opposed it.

Love thought Trapp should have abstained from voting for something "his boss wanted," a reference to Parmley's position on the Downtown Community Improvement District (CID) Board of Directors.

Mr. Trapp has a $100/hour consulting job from the CID interviewing downtown homeless persons, Love added, noting that he could not understand the TIF vote either.  "In case you haven't noticed, hotels are going up all over the city without taxpayer help," he said. "The Broadway is in a prime location."

Mr. Trapp consumed his alloted three minutes playing defense.  "I have a right to make a living. We're only paid $6,000 a year," he replied.

The insinuation he had a conflict of interest was "uncalled for, unfair, false, and typical" of Mr. Love, who had a "history of" saying such things, Mr. Trapp said.   Love and Trapp squared off three years ago for the 2nd Ward slot.
Mr. Love was undeterred, hammering home a forceful case for why Mr. Trapp is the wrong person for the job.

"Whining, complaining, and attacking are easy," Mr. Trapp said.  "Making the tough decisions, considering all sides," is the hard part.

Builder Rhonda Carlson defended Mr. Trapp, thanking him for listening, availability, and well-considered decisions.   She spoke about a meeting with a consultant about power transmission that Councilman Thomas "hijacked," Betsy Peters told the audience. 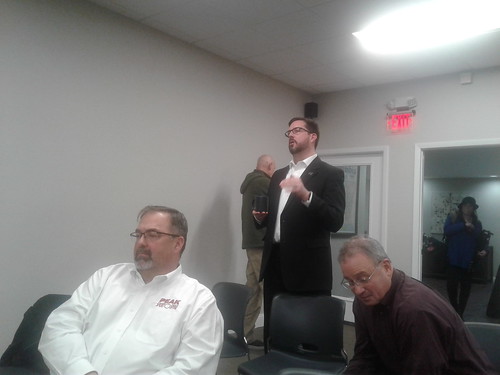 More money, more staff, and less duty to "solve the Columbia police morale problem will not work," he said.  Morale is so poor, officers use a phone app to count down their days to retirement.
It was "ridiculous," Moore explained, to ignore the elephant in the room, the "toxic leadership" pulling down a department that just ten years ago was the pride of the nation, with "750 applications for three positions."

"I remember that," Love interjected. "When the FBI, CIA, and other national law enforcement recruited from our police department."

Matthes and Chief Ken Burton "have poisoned the police department," Moore said loudly from the back of the room, after Lile asked him to clarify.  Instead of promoting the best and brightest, Chief Burton ran them off, Moore said.  "All the ethical, moral, high-performing people got the hell out," he explained.  "But nobody will talk about this. Nobody wants to deal with it."

"We can't just fire the Chief," Mr. Trapp said, referencing state law that grants tenure-like job security.  Matthes, meanwhile, "has proven himself to be an excellent leader," he said.

"I feel traumatized by the fact that our public safety personnel are operating in such a low-morale environment," Mr. Love explained.  Before raising property taxes to pay for more cops, improving morale, retention, and job satisfaction "has to happen," he said.  "You lose a tremendous amount of efficiency when people hate their jobs."

At evening's end, Ms. Peters and Mr. Trapp had mostly retreated.  She had little to say in defense of either Burton or Matthes "who just got a $15,000/year raise from you guys," Love said.  She could not understand charges of mismanaged public funds.

From his previously bold elocution, Mr. Trapp dropped his voice so low audience members in the back had trouble hearing him.   As one of the longest-serving Council members currently in office, who has shown a strong grasp of the issues and a willingness to listen, Mr. Trapp said he deserved a third term.