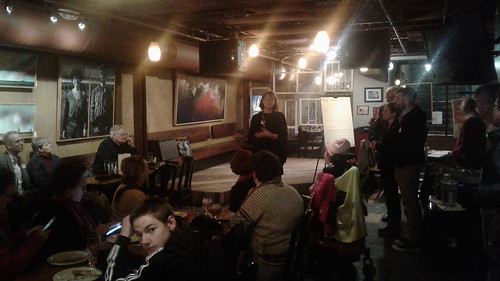 A longtime First Ward resident whose tireless advocacy has put her on many residents' best Council candidate shortlists, Kelley lives in what was one of the central city's toughest areas, where gunshots and sirens once drowned out katydids and crickets.

"My friend Vernon and I couldn't rent our upstairs apartment in the house we bought from our landlord because so many people said the neighborhood was too dangerous," Kelley told the crowd at Broadway Brewery.   "We wanted to change that stigma."
In the 20 years since helping start RNA, the community-building she sparked moved the neighborhood around some critical corners and yielded a diverse assortment of community building blocks:   the Central Columbia Get Out the Vote committee, an affordable health fair, and this year's free New Year's Festival.

It also prompted her to further service on Columbia's Community Development Commission, the Community Land Trust Steering committee, and the Family Impact Center advisory board.

On the job, Kelley was named an MU Service Champion in 2015, for going "above and beyond what is expected and performing duties with an outstanding work ethic and attitude."
Though she is running on some typical platforms -- transparent government, constituent accessibility, walkable neighborhoods -- Kelley shared some insights about First Ward life Thursday that aren't obvious.

"When Vernon and I first moved into the neighborhood, I didn't realize how systemic many of our issues were," Kelley said.   Lawmakers and pundits often expect low-income neighborhoods to have problems such as crime.    But systemic roots -- in history, culture, tradition, and policy at City Hall -- also play important roles.

City government's neglect of First Ward infrastructure is one example.   It's hard to provide decent housing on streets with no sidewalks, storm drainage, or adequate police protection.
Not surprisingly, quality affordable housing is a major Kelley platform.   And she sees the potential for it in a First Ward staple:  hundreds of smaller homes,  many nearly a century old, whose hard oak bones have withstood wear, tear, and decades of minimal TLC as rentals.

She'd like to see more of these homes owner-occupied.

"I decided to run for City Council after I attended a Historic Preservation Commission meeting,"   Kelley said.  "A Commission member told me the solution to saving the houses in our neighborhood was to get together with neighbors and buy them.    He did not understand that most of the people in my neighborhood were barely hanging onto their own houses."
"I decided that if we are ever going to get creative, innovative solutions in central Columbia, then someone who lived that experience had to be part of city government," she said.

Kickoff supporters praised Kelley's "passion, "vision," and "heart",  including Rita Fleischmann, who has known the candidate personally and professionally for over 20 years
"Pat has the ability to connect, to listen, and to hear," said Fleischmann.    "With her expertise, dedication, and the City of Columbia's input, I foresee her making the First Ward FIRST in so many positive ways."