THE MANY VOICES OF SKIP WALTHER: Lawyer, candidate, columnist, lobbyist 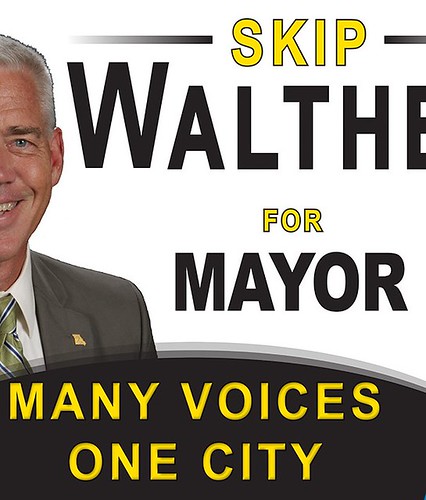 Which voice will voters hear?  Part 2

COLUMBIA, Mo 3/22/16 (Feature) -- At a televised debate last week, Columbia Mayoral candidate Skip Walther insisted his rules of professional conduct "prohibit attorneys from disclosing even the identities of their clients."

He was exempt, he said, from requirements to register as a lobbyist and file monthly reports with the Missouri Ethics Commission (MEC) that would disclose client identities.

"I can't imagine a client coming into my office and understanding that I'm going to Booches and announce to everybody in the crowd who my new client is," Walther said.

Maybe not Booches.  But the attorney and Columbia Daily Tribune columnist has announced his clients in Vox Magazine.  The Trib.   A legal directory.   And dozens of public records over two decades.

These clients hire him to be "persuader in chief" before governmental bodies.   But Mr. Walther says it is not lobbying.


"Early last year, Walther helped Landmark Hospital — a long-term acute care facility — convince Benton Stephens residents and other neighborhood associations to allow the city to rezone property on Old 63 next to Columbia Country Club," Vox Magazine reported in a 2009 profile.   "Emotions were high, but in the end Walther convinced more than 50 neighbors to side with him and his clients, swaying the City Council to rezone the property."

Walther's work was "detailed and time-consuming," the profile explained.  It included meetings with "anxious neighbors", Planning and Zoning Commissioners, and at least two Columbia City Council hearings, on April 21 and May 5, 2008.
Council members met with Mr. Walther twice.  He "wanted an opportunity to present all of [Landmark's] information to the Council," the April 21 minutes explain.   He appeared "on behalf of Landmark Hospital, asking for the Council’s endorsement of their O-P rezoning," the May 5 minutes explain.

Such actions constitute lobbying, say Missouri statutes and the MEC.   They trigger two mandatory filings:  a registration with check boxes next to the type of lobbying (e.g.  X "I lobby elected local government officials"); and monthly reports that detail "relationships, associations, expenditures, clients."

"The public has a right to know those individuals who are seeking to influence legislation or executive decisions," MEC director Charles Lamb wrote in an official Opinion, 1997.10.113.

Often about zoning issues, Mr. Walther has lobbied the City Council for private land owners and even a neighborhood association, back in 1997.   In each case, the minutes begin:  "Skip Walther, an attorney with offices at 700 Cherry Street, spoke on behalf of...."

His nearly 7-minute January 2013 testimony addressed virtually all aspects of the ordinance, and included statistics that argued it wasn't necessary.

"Fourteen over-occupancy violations out of 25,000 rental units is miniscule," Mr. Walther emphasized.  "Those numbers do not justify more regulation on the rental businesses in Columbia.”

The Adjuster
About a month after representing the CAA, Mr. Walther went before the city's 8-member Board of Adjustment representing business owners appealing a city staff decision to deny a commercial building permit.

"Attempts to influence any action by the executive branch of government or by any elected or appointed official, employee, department, division, agency or board or commission thereof" are known as "executive lobbying," according to Missouri law.

Seeking a variance on parking requirements, he lobbied for the Delta Xi Housing Corporation -- a Mizzou sorority -- before the Board of Adjustment in May 2013.    It was an elaborate presentation, with photographs and handouts and a plea:  If the sorority didn't get a permit by the following Monday,  "they would have to delay the project for a year."

For the Alpha Gamma Sigma Building Association -- a Mizzou fraternity -- Mr. Walther in March 2015 lobbied the Board of Adjustment to waive a building height requirement.   His client wanted a 5-foot variance, to increase the maximum permitted height on their property from 35 to 40 feet.   Board members approved the variance with a 5-1 vote.

An apartment owner-manager -- Southport-Yarco, LLC -- hired Walther to ask the Board of Adjustment for variances to add more units in July 2014.   He presented a 5-part proposal designed to allow  residential uses on office-zoned property without rezoning the property.

Walther has played a significant role in the fire sprinkler debate, both privately and later, as a public official.

And in a bold move, Mr. Walther lobbied the Columbia City Council for "a significant number of the Greek fraternity and sorority house corporations," the April 7, 2008 minutes explain, "asking the Council to postpone a decision on amending this ordinance and for the Mayor to appoint a committee that would create a framework...."

The bold part:  Mr. Walther landed a position on that committee, the "Fire Sprinkler Task Force".

There may be a silver lining in Mr. Walther's lobbying -- which is mostly successful -- for the general public.

He has represented clients before the Boone County Commission since 1994, on commercial rezoning;  an asphalt plant; a rock quarry; an agricultural rezoning; and a request by Bob Lemone, whose family sold IBM their Columbia headquarters, to rezone land for a steel factory from commercial to industrial.

If elected Mayor, perhaps he can convince the Commission to drop its TIF lawsuit against City Hall.