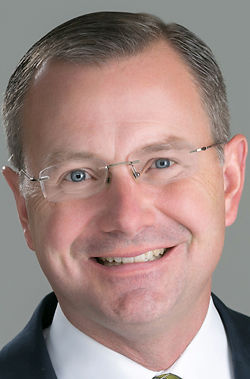 "We need a blueprint that provdes predictability."

COLUMBIA, Mo 2/1/16  (Beat Byte) -- Among changes at City Hall Columbia Mayoral candidate Brian Treece would like to see:  the end of City Council meetings that stretch into the morning.

"If Columbia is going to be one of the fastest growing cities in the Midwest, we need a blueprint," Treece said.   "We need to provide some predictability for developers, homeowners, neighborhoods, and the folks who rely on the city to deliver their public safety and infrastructure needs."

Peppering his comments with specifics, Treece said "we were all surprised" when city manager Mike Matthes announced that Columbia was "100% out of infrastructure" in Dec. 2014.

Combined with his previous position as chair of Columbia's Historic Preservation Commission, the DLC role has afforded Treece a front-row seat to the two sides of local government:  what we need and what we want City Hall to handle.

"There's a handful of things we can all agree government should do well," Treece explained.  "Infrastructure, public safety, those things we can't do ourselves.  If we don't get that right, the public isn't going to trust us to do the other things some of us want government to do:  trails, parks, and so forth."
Treece wants to focus on "what we need" with a "back-to basics" approach that "takes care of infrastructure and our first responders -- police and firefighters -- so they're keeping pace with the city's growth."

Among Bradley's other questions:

Q (Bradley).    What can the Mayor do in Columbia's "weak Mayor" form of government?

A (Treece).    "The Mayor can set a tone" that "remembers who we are working for", so we can have a "government that is open, honest, and transparent."

Q.    Are there citizens in Columbia who don't believe City Hall is transparent enough?

We took a big step back last night with the transmission line discussion.   You can see where the process was flawed, where the "decision matrix" was weighted heavily on one side or the other, and where certain Council members failed to ask critical questions, such as:   How tall are these towers?   How wide are they at their base?  Is there another route we could have gone?


Q.    Have deals been made in the past that benefit only a certain few?

Right now, we're cannibalizing our neighborhoods by delaying much-needed sewer projects in certain parts of town; with the Providence Rd. improvement project to accomodate new student housing; and now it looks like they've rushed through these high-voltage power lines in one of our finest neighborhoods, all to subsidize a certain kind of development in a certain part of town.

That's not a sustainable economic development or growth strategy.


Q.    Why is there low morale among the city's police officers?

The officer who patrols my beat told me that when he comes on work at 3 pm for a 12-hour shift that goes until 3 am, he has as many as 22 calls pending, the earliest of which is someone who has called 911 at 8:30 that morning.    As he clears these calls, more calls come in.

We wonder why they have low morale, and why public opinion about police isn't always positive.


Q.    How would you, as Mayor, deal with this morale problem?

A.    We need to invest in community policing that better serves our neighborhoods, without the expense of taking officers from our traffic enforcement and other units.   When police develop a rapport with the people they serve by being in their neighborhoods, it's much easier for them to solve or prevent crime.


Q.    Do you think city manager Mike Matthes and police chief Ken Burton shoulder a lot of the responsibility for the state of the police department today, and why it doesn't have more support from the public?

A.    Ultimately, it's their responsibility, but again, it's the Mayor and Council who set the tone and the expectations about what we want city staff to deliver.

In the hour and a half the City Council debated the city manager's pay raise, 19 people called 911 at a time when there were no police officers immediately available to respond.

That's how out of whack our budget priorities are.

[Speaking of setting the tone], it was tone deaf to do the city manager's raise right after the parks tax increase voters approved in November, because it leaves voters with the lingering doubt, "Did we really need to have that tax increase?"

Q.    Though the job of Mayor is non-partisan, how would you describe your political leanings?

A.    I always like to say, there's no Democratic or Republican way to fix a pothole.

I'm pretty conservative on fiscal issues, on what we fund first, on how we budget for priorities, on when we go to taxpayers for more money.   I'm fairly progressive on the cultural issues that make Columbia unique.

Q.    Is the county-owned Boone County Fairgrounds important to the City of Columbia?

A.    Absolutely.   It's not only an opportunity for green space preservation, but also an underutilized economic development tool.


Q.    Do the city and county need better communication?

A.    Of course!   But we don't need a court order to do it.   The fact that the County felt their only recourse over the City's TIF district proposal was to sue the City probably says a lot about the deterioration of that relationship.


Q.    When we look at downtown development like the CVS pharmacy or the proposed 10-story student apartment, what are the things City Council should be concerned with?

Not cannibalizing other parts of our city to support downtown development.

If that same California developer went southwest of the Village of Cherry Hill and bought a 3-acre plot of land for the 10-story student apartment, he or she would be required to put in all the streets, all the water, all the sewer, all the sidewalks, all the fire hydrants.   But because he's buying a plot in the middle of downtown Columbia, there's no concomitant requirement.

We have a great city and we want to keep it a great city.   We do that by investing in our infrastructure, our public safety, and developing a well-planned blueprint that provides predictability and assures that our growth is paying for itself.