A crash so bad it required a Congressional bailout

COLUMBIA, Mo 4/5/15 (Beat Byte) -- Two Moberly-based companies and one private individual with addresses linked to a businessman convicted of multiple financial crimes have each donated $500 to the Jerry Kennett for Boone Hospital Board Trustee campaign.

The Heart Beat previously reported a decades-long trail of bad debts and financial failures linked to Kennett and business partners including Riley.

The three donations total $1,500.   By contrast, Kennett's opponent, Robert Doroghazi, has reported only one $500 contribution to date, from his campaign treasurer, John John.


Candidate Kennett -- considered one of the nation's best cardiologists -- has denied any more than past affiliations with Riley and the other defunct enterprises, calling them "irrelevant".

Whomever wins Tuesday will help decide "how to manage and invest $54 million in cash," the Columbia Daily Tribune reported, in a story entitled "Money and medicine:  New Boone Hospital board member will be a part of major business decision".


A Kennett partner in FerTech Environmental,  Floyd Riley was convicted of wire fraud, money laundering, and transporting stolen property in 2004.  Ten years earlier, in 1994, he pleaded guilty to two counts of bank fraud.

His reputation was well-known by the time Kennett became his partner in the early 1990s.   In 1983 and 1990, Riley was entangled in NCAA accusations that he "improperly provided air travel" to University of Missouri athletic recruits.   By 1990, reports surfaced about his business troubles. 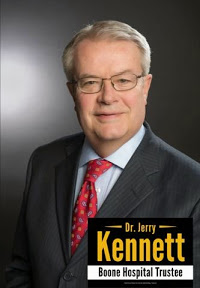 FerTech failed in a fashion so spectacular it required a Congressional bailout, the Alaska Business Monthly (ABM) reported in a 2,500-word feature story in 1999.

"It was a subcontractor's worst nightmare," began the story -- entitled simply "Swindled" -- about an Alaska Corps of Engineers environmental cleanup project that fell apart along with FerTech, "the prime contractor who fled with everyone's money."

Kennett owned FerTech with Riley and one other partner, North Carolina textiles magnate G. Allen Mebane.  The financial mess the three men left in Alaska was so bad, it required a Congressional bailout to fix.

FerTech got the Alaska job with a low bid "barely one-third of the Corps' estimated cost," ABM reported.  The company "received advances totaling more than $120,000, but those federal dollars weren't shared with the subcontractors."

"It was not fair these subcontractors received no compensation for the work they performed," observed Sen. Frank Murkowski, R-Alaska, announcing the cleanup compensation bailout, ABM reported.  "This remedies that problem, hopefully once and for all."

"Several past financial litigations involving Jerry Kennett have come to light," Tribune columnist Hank Waters wrote yesterday, urging voters to look at the bright side.  "Nothing in Kennett’s personal financial background makes him unfit for the office."

On the bright side -- but probably not enough to boast about on campaign mailers -- FerTech's Alaska meltdown "resulted in at least one policy change with the Alaska District Corps of Engineers:  Surety bonds are now required on select service contracts," the ABM reported.