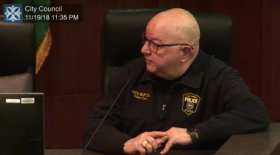 Letter; right click to enlargeBurton has been under fire almost since he took office in 2009.