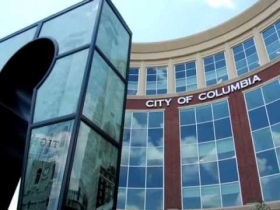 Aging central city infrastructure and shoddy construction city officials compare to "the stuff you see in student apartments" waylaying that tower of power?

The same problems plaguing that $35 million behemoth so many other Columbia residents put up with?

What if?  What would a story about that look like?  A horror story, just in time for Halloween, complete with a new demon:  "pop up" floods -- the interior version of flash floods near leaking ceilings and faulty sprinkler systems.

"I hate to admit it, but poor-quality construction coupled with long-neglected central city infrastructure is finally taking a toll on Columbia's flagship building," city manager Mike Matthes told the Columbia Heart Beat, in a rare exclusive.

Heart Beat reporters caught up with the beleaguered monarch wearing wading boots and toting an umbrella as he made his way from City Hall's soggy basement to his corner office at the top of the Daniel Boone City Hall building on Broadway.

"Can you empathize with all those people in different parts of town who've waited eons for better sewers and storm drains?" we asked.

Matthes took a deep breath.  "Not really," he said.  "City government must take priority over John and Jane Q. Public. It's like on airplane flights, you know, when the parent has to put on the oxygen mask first."
That kind of talk usually only means one thing.
"That's right," Matthes said.  "A tax increase, and a pretty big one.  We're already talking to our Swiss bankers at UBS about opening up several dozen new numbered accounts."

Will there be a dog-and-pony-show, where bankers and businesspeople and other trough feeders line up to shill whatever the City wants? we asked.

"Of course," Matthes said.  "We know the public will want to get behind fixing this mess before it gets any worse."

Thirty five million dollars later (up from original estimates of $22 million, of course), Columbia's City Hall building underwent state-of-the-art renovations a decade ago.  But Matthes blames "faux this and faux that, including a faux roof," for water damage, mold, and chronic leaks throughout the building.

Undersized sewer pipes installed during the renovation have also created a "flush-and-rush" crisis in bathrooms on every floor. 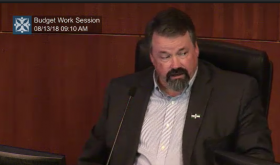 Matthes"So when you flush, okay, you literally have to run," the city manager explained. "Otherwise, you're name is on the next overflow, the next pop-up flood.  We actually name it after you.  That can be, okay, pretty embarassing."

"Logs cause clogs.  Not single ply," one man tried to explain.

"I keep urging them to spring for double ply.  Then people would use less," the sustainability director added.

"We can't afford double ply," Mr. Matthes interjected. "I'd have to requisition more money from Switzerland, and my bosses want it to stay put. It's there to back bad developer loans when our banks need it. That's a way more important crisis just waiting to happen."

Power outages have also plagued the new City Hall, shutting down entire sub-bureaucracies and filling the halls with cold air as furnaces shut down.
"That's why it's so rank in here," Matthes told us.  "A bitter combination of floating Baby Ruth bars and no air circulation."
"But isn't city government Columbia's major utility?" we asked.  "Can't you fix this?"
"Not without a sizeable rate increase," Matthes explained.   "You understand."

As the city monarch -- er, manager -- squished across the damp, spongy carpet in his office, he looked up forlornly at ceiling tiles stained with rainwater.

"I tried to tell everybody -- we're out of infrastructure," he said.  'Read my lips:  No New Construction'.  But they wouldn't listen."

-- Obviously this is fake news.  It would never happen.