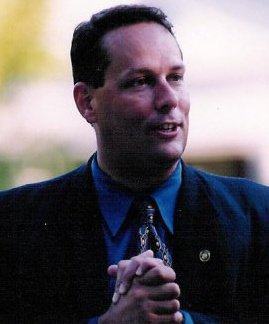 COLUMBIA, Mo 6/1/20 (Remembering) -- The very first person I met when I moved to Missouri over two decades ago was an up-and-coming Man of the People who hired my wife's brother Carter to be his first campaign manager.

That young man, Chuck Graham, went on to multiple terms in the Missouri State House of Representatives and Senate.

Senator Graham died May 19 in Columbia. He is survived by his wife Kate and brother Andrew.

I MET CHUCK OVER a crowded outdoor fire pit on Carter's ten acres in Ashland, Missouri. I don't remember what we confabbed about -- probably politics -- but I do remember Chuck had an encyclopedic knowledge of his then-future constituents I saw displayed many times over the years.

He loved his people enough to know each of them, what they liked, disliked, who they were, what they needed in a political representative, an art most politicians never master.

I remember he had this one-of-a-kind way of firing off zingers and other clever observations. He'd straighten his back, wind a crink out of his neck, look you straight in your eyes with a gleam in his own. Let what was on his mind roll off his tongue.

Not long after we moved here, Chuck told my wife Alison and I how he'd go to the ends of the Earth for Blue Bunny ice cream, a brand I'd seen in stores but knew little about. We had to do some interesting wheelchair maneuvers to get him upstairs to our kitchen. The Blue Bunny rocky road made it all worthwhile.

"Watching the pilgrimage?" Chuck asked me a few years later, in a restaurant Alison and I owned on Ashland's main street -- a restaurant for which Chuck designed the Americans with Disabilities Act (ADA) improvements (it was a century-old building gut renovated to the studs).

"Donnie, Karen, me -- all the pilgrims here to see Janie."

Jane Flink, editor-in-chief of the Boone County Journal, the local newspaper. Chuck considered Jane a friend and a consummate journalist: smart, fair, no-bullshit, keenly aware of her duty to her readers. It was high election season.

"And there goes Donnie," Chuck said. As if on cue, then-Presiding Boone County Commissioner Don Stamper drove by my window, on his way to kiss the figurative ring.

That was how on-point Senator Graham was about local politics.

BEFORE, DURING, AND LONG AFTER Chuck's political career, he was an ardent advocate for the rights and needs of the disabled. My sister Stephanie had muscular dystrophy, died when she was 28. Chuck's advocacy struck a lot of chords.

He won the EB Whitten National

Missourian's Darkow remembersRehabilitation Association Award in 1997 based on a nomination Alison wrote, a year before we moved to Missouri from the Pacific Northwest.

Alison knew Chuck from way back, when they worked together on ADA and social service projects in Columbia, where she was a Mizzou alum.

Here's what she told the award committee:

"Mr. Graham has demonstrated distinct and unparalleled leadership through personal example and political action in the effort to remove environmental and legal barriers encoun-tered by individuals with disabilities.

"His efforts date back to when he was 16 years old, at which time he was involved in an automobile accident that left him with paraplegia.

"After that, Chuck said many people focused on what they thought he could not do: go to college, live independently, drive a car, excel in sports, work.

"Chuck graduated from the University of Illinois in the top 100 seniors, and was a two time All-American wheelchair basketball player.

"He has impacted thousands of individuals through his contributions as the Director of Programs for the Coalition of Citizens with Disabilities in Illinois (1987-1990) and as the Missouri Coordinator of the ADA (1992-1996).

"Chuck's leadership has been instrumental in forcing the University of Missouri to update facilities to comply with the ADA. As a result, many more individuals can enjoy athletic events.

"Chuck was elected to the Missouri House of Representatives District 24 in 1996."

And that was just the beginning.

IF HEAVEN DIDN'T OFFER all-you-can-eat Blue Bunny before, you can darn well bet it does now.