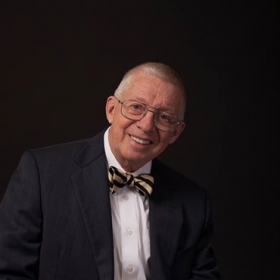 "I remember the time he said a staffer had a 'nice ass' and the time he introduced a female colleague as 'that teenage blonde chick' and the time he dismissed a female staffer in caucus for 'being emotional,'" Jeremy LaFaver Tweeted about Mr. Kelly, also a former Democratic State Rep, January 26. "Cringeworthy behavior on a regular basis."
FELLOW REPS

Mr. Kelly disputed that charge, instead claiming instead his Tweets were misbegotten but well-meaning attempts at humor.  Among other off-color remarks, he refers to women as "bitches"; warned a group of African-American moms that educating their daughters would make them "all uppity"; and marvels that young girls can read and do math.

"It’s not okay and he obviously recognizes that or else he wouldn’t have deleted his Tweets," LaFaver told the Heart Beat.

Neither Mr. Kelly nor his campaign responded to requests for comment. 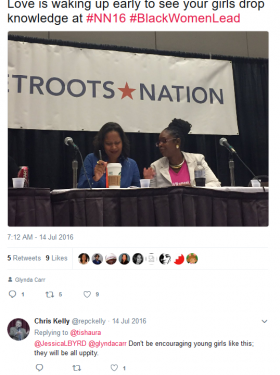 
The Missourian story followed Kelly's comments about Columbia police officer Brian Tate, disciplined for "slurs and bigoted" Tweets.
After questioning "Tate’s suitability to be an officer and his worthiness for promotion," Kelly said in a news release he "knew the difference between insensitive humor and racially motivated, misogynistic slurs."

In a web post entitled About My Tweets, Mr. Kelly argued the deleted Tweets were taken out of context as part of an opposition mudslinging campaign, an assertion he reiterated at a recent Muleskinners forum.

"I could apologize for using words that are now strictly off limits in PC Nation," Mr. Kelly wrote. "That might assuage some voters, but that would be disingenuous of me. I have never used my flippant tweets to demean or belittle, let alone as a sexist or misogynist.  For having an exaggerated opinion of my own sense of humor, I do plead guilty."

"My experience with Chris is that he is professionally demeaning and dismissive to women," Mr. LaFaver told the Heart Beat.  "I’ve heard Chris say things like this in private conversation for years," he added on Twitter. "He’s not being funny -- it’s who he is. He’s sexist and thinks it’s cute."

Mr. Kelly is well-known for his "no filters, no prisoners" political approach. The Columbia Tribune praised his style in a 2014 send off, despite criticism for other inappropriate comments, as when he publicly suggested statehouse candidate Kelly Schultz's "nice butt" was her chief political asset. 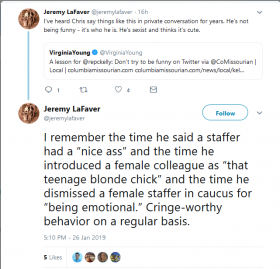 Right click for larger
"Chris deleted over 10,000 comments from his official state rep account three days before he filed for Mayor," Treece told the Missourian. "That’s not the type of transparency that we need in public office. It sets the tone from the top that withholding information or deleting records is acceptable and it is not."
Both local newspapers in 2010 criticized another Columbia City Council candidate, Tracy Greever-Rice, for deleting her comments on Columbia Tribune stories before announcing her candidacy.

"The Tribune does not allow people to delete their accounts and comment histories," then-managing editor Jim Robertson said. He distinguished between deleting one or two comments and "deleting an entire account to wipe out a history of commentary," as Mr. Kelly did with his Tweets.

"If the consequences are them saying, 'Oh, I wish I didn’t say that,' well, they knew going in it was a public forum," added then-Columbia Missourian editor Tom Warhover.  "Clicking 'post' online is like hitting the button to start the print presses. Once it's done, there's no going back."