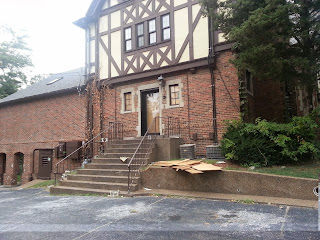 Neighbors say the old home is falling into disrepair, and worry that squatters, vandals, and even members of competing fraternities will break in and wreck the interior.  Mattresses, furniture, and trash have littered the yard since residents left the house this summer.

"The Mizzou chapter is undergoing some changes," said national Kappa Sigma executive director Mitchell Wilson from his office in Charlottesville, Va.   "They're in the process of refocusing operations."

A storied fraternity that traces its roots to the University of Bologna, Italy in the 1400's, Kappa Sigma came to America in 1869, when five male students at the University of Virginia chartered the first chapter.

Fraternities and their female-student counterparts, sororities, come and go from college campuses, both temporarily and permanently.   National organizations may shutter them for rule or charter violations; universities may evict them for conduct and legal problems.

Kappa Sigma's Mitchell believes the Mizzou closure is temporary.   "We plan to have people back in the house," he told the Heart Beat.  "But I can't tell you exactly when."