Details
Written by Mike Martin
"I don't like half the stuff they do." 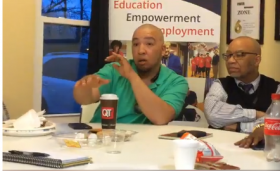 One attendee -- an African-American man in a short-sleeve green shirt (photo) who lives near Lake of the Woods -- compared his experiences with the Boone County Sheriff and Columbia police.

He also described crime-related stressors in his neighborhood.

"So the Sheriff’s deputy pulls behind me, comes to the window, and says, 'How you all doing today? I noticed your tags are expired.'
"So we said jokingly, 'We haven’t been driving. We’ve been sitting in the driveway the whole time. Hahaha.' And he was laughing with us. And he said, 'Well just let me get your driver’s license and I’m gonna go run it.' He ran it, came back five minutes later, and said, 'Hey, you all have a good day. Just be careful while you’re out there.'

About neighborhoods long-marginalized through decades of deliberate City Hall neglect -- of infrastructure, policing, code enforcement, street work, and other basic services, "I live in that community.  That’s the neighborhood I live in," the man explained.


"One of my basketball players – I coach basketball – got shot in my front yard in the back, about one o’clock in the morning.
"Two houses down from me, a young man got shot by his girlfriend on a Sunday morning.

"Children between the ages of eight and thirteen run around my neighborhood at one, two, three o’clock in the morning.

"I’ve had my car broken into. I’ve had my windows shot out. I have landlords who don’t keep up their property around the neighborhood. I have single mothers who don’t know how to raise their children properly.

"I have crime all around me.
Though he strongly prefers the Boone County Sheriff's policing philosophy, only results matter in the end, the resident explained.

"When we call the police, I really don’t give a damn about your philosophy," he concluded. "Just do something to help me. I’ve had encounters myself with the Columbia Police Department.  I don’t like half the stuff they do. But if you have a community that is stressed, and a police department that is stressed: When you put them together, what do you get?"
Four Columbia Police Officers -- Sgt. Robert Fox, Lt. Geoff Jones, Sgt. Mike Hestir, and Officer Tony Parker -- attended the RMF meeting, mostly to promote City Hall's second attempt to secure a new property tax for more police officers.

A similar ballot issue failed in 2014.

Audience members were not interested in discussing the tax increase, instead turning to their own often long-simmering problems and concerns with crime, police behavior, and a police department management culture described as "toxic" and "out of touch" that has a terrible effect on officer morale.