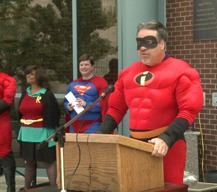 Administrators chill out in new $8 million digs, but send students home for cool air
COLUMBIA, 9/10/12 (Beat Byte) -- A years-long promise to install air conditioning in Columbia Public Schools has come back to haunt students, teachers, and weary parents with a vengeance. District officials have sent students home early over hot temperatures at Jefferson and West Junior High Schools since the school year began.

Neither building has central air, a critical part of learning environments not only heated by Mother Nature, but air-cooled, high-tech equipment like computers and monitors that belch heat into offices and classrooms.

The early dismissal explosion is one more "we told ya so" in a long string of told ya so's over promises school district administrators perennially attach to tax levy and bond approval votes.
"The bigger issue continues to be the broken promises of CPS," a Columbia Tribune reader wrote about yet another "coping without A/C" story August 31 (see story below). "Every time they bring another tax increase to the table, getting everything air conditioned is always promised."
This latest round in the battle for cool air includes an absurd turn of events: superintendents cooling their heels in new $8 million administration offices built with taxpayer money that, for mysterious but high-sounding reasons, cannot be used to install classroom air conditioning.

"Administrators sitting in their new, air conditioned offices on Worley St. are probably laughing their butts off," wrote another Tribune reader.

All schools are finally supposed to be air conditioned in 2014. But that promise almost hit the skids, too. In August 2011, Superintendent Chris Belcher stirred up a storm of controversy suggesting he might break it in favor of finishing the $80 million Battle High School.

"Air-conditioning projects initially were part of the 2010 bond issue, but the majority of the first chunk of the bond funds...are going toward costs for Battle High School," the Columbia Daily Tribune reported in an article aptly entitled District proposes tax levy increase.
"Teachers and parents just feel like we promised this to them," Belcher told the Trib.
RELATED:
http://columbiaheartbeat.blogspot.com/2011/08/big-renege-are-school-officials.html
http://columbiaheartbeat.blogspot.com/2011/08/big-renege-pt-2-former-top-cps.html
http://www.columbiatribune.com/news/2012/aug/21/west-jeff-schools-plan-early-dismissals/
http://www.columbiatribune.com/news/2012/aug/31/jeff-west-adjust-to-early-dismissals/
http://www.columbiatribune.com/news/2012/sep/04/junior-highs-dismiss-early-again/