THE PETER PRINCIPLE: What CoMo's teachers should ask Supt. Stiepleman about money NOW

But as City Hall has taught, whenever administrators say "no money in the Budget" it's time to look at that other, more important document, the Comprehensive Annual Financial Report (CAFR).

The school district's net worth is up nearly $10 million -- over 6% in one year, the most recent CAFR explains.

Finally, CPS has over $250 million in cash, investments, and tax money on the way.

Teachers should ask their leader, Superintendent Peter Stiepleman, Ph.D.:  "How can there be no money?

Question 1:   Given this information, how is CPS is hurting financially?  (Has your net worth gone up 6% in a year?) 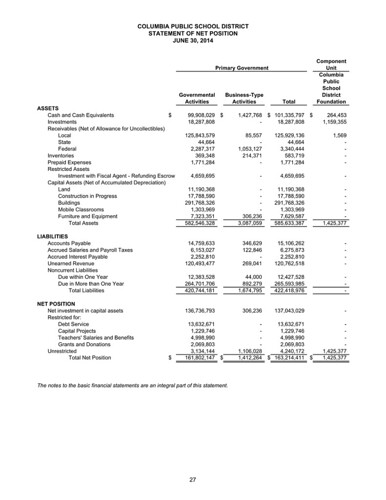 The CAFR says the governmental fund balance "helps determine whether there are more or fewer financial resources that can be spent to finance the District’s programs."

Question 3:   If the District is too poor to give teachers a 5% raise, how can it have $37.8 million available for use at the "District's discretion?"

Question 4:   Why not use that discretion to give teachers a pay increase -- or taxpayers a break?

It has another $130 million in "receivables," i.e. cash coming in from property taxes, a statewide education sales tax, and other sources.  (CAFR pg 27, click pic for larger).

That's over $250 million in cash, investments, and incoming tax money.  A quarter billion dollars.   But as the Trib story says, "CPS administrators tell teachers there is no money for increased salaries."

Question Five:   "No money"?  With a quarter BILLION dollars?  How can that be?