ALMETA CRAYTON: A leader for everyone, making sure Everybody Eats, Part 2 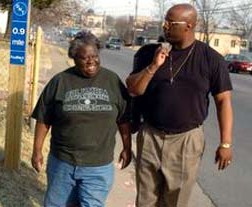 A candidate for change on the Columbia City Council   Cont. from Part 1

COLUMBIA, 11/15/12 (Profile) -- "Almeta Crayton is a breath of fresh air. Her philosophy of life is heart-warming and invigorating. She sets examples and exerts personal influence among her peers."
Those words of encouragement came from none other than Hank Waters, the Columbia Daily Tribune publisher, when he was summarizing his picks for First Ward Columbia City Council back in 1996.   Waters favored incumbent Colleen Coble, who won her race against Crayton that April.
But the encouraging words stuck, and Miss Crayton found herself fully taken with the political bug.

Though life in the First Ward has vastly improved since, Crayton -- then 36 -- entered the Council race to right some inequities that still exist.
Council members were generally insensitive to the needs of low income families, Crayton maintained, and a long history of problematic race relations only made matters worse.   She ran as a friend of the dispossessed, a person who "sees the world through different eyes...and believes her perspective would bring about positive change in the First Ward."
Sixteen years later, Crayton is still going strong with Everyone Eats, her annual Thanksgiving feast.
A long-time public housing tenant, Crayton went after forces that conspire to keep poor people poor.   Crime, government neglect, lack of job opportunities for young people, lack of homeownership:  the First Ward had its share of problems a representative like Coble didn't see -- couldn't see -- with the same clarity, Crayton argued.
"Coble said she sees things changing for the better. 'I'm proud of the improvements,'" she said."
But that perspective was naive and uninformed, countered Crayton, who said she and Coble were "worlds apart."   Where Coble lived in white Columbia, Crayton lived in black Columbia, "a world neglected by Columbia government and hurt by poor policy decisions."
To rebut Crayton, Coble pointed to safer streets and homes rehabilitated with federal funding.  But Crayton invited her to tour crack houses that had sprung up in the meantime, highlighting the difference between the Katy trail crowd -- mostly white local progressives with secure professional jobs -- and the 20% of Columbia that, even today, remains mired in poverty and social problems.
"They pay taxes, too," became a frequent Crayton refrain.  As taxpayers who bear a disproportionate share of Columbia's sales tax-happy government, low income residents deserved their share of services, she argued.

Crayton came to Columbia via St. Louis and Jefferson City with her son Tyrone.  At Bear Creek public housing, she discovered public transportation so erratic, she had to push her son in a stroller several miles to University Hospital and back home for doctor appointments.
She graduated from public housing projects to Section 8, a rental assistance program, then finally to home ownership.  With help from Federal block grants, she purchased and renovated 409 Oak Street, the bungalow where she lives today.
As a member of the "working poor," Crayton brought to politics her experience with the dilemmas posed by low wage jobs.  Variously working as a cook and a nurse's aide, she actually lost money on cab fare because city buses weren't reliable or well-located.   She also had to face the hazard of being kicked off assistance programs if she made one dollar more than guidelines required.
Crayton's first-hand experience moved people to support her.   "I thought she knew what she was talking about," said Columbia resident Vira O'Dell at a League of Women Voters forum.   Other supporters said Coble had only preserved a dysfunctional status quo while Crayton represented real change.
"Almeta is so everyday, and she's so citizen," said supporter Pete Hern.

NEXT: Success -- and nine years on the City Council