The REAL power in Columbia, Missouri
COLUMBIA, Mo 10/15/14 (Op Ed) --  If you're a child of the seventies, you might remember Daisy Duke, Uncle Jesse, Sheriff Roscoe P. Coltrane -- and Boss Jefferson Davis "J.D." Hogg from the Dukes of Hazzard.   Despite statutes and ordinances to the contrary, Boss Hogg ran the town while the Duke boys ran circles around him.

Turns out Columbia has not one, but ten Boss Hoggs, and they're a lot harder to run circles around.  They operate through a system this publication has called the "shadow government," making those behind-the-scenes, backroom decisions that seem to come out of nowhere, usually with full Mayoral and city managerial support (think Blight and Opus for starters).
For 94 years, the Bosses have met at "Columbia’s esteemed Round Table of prominent business leaders," as the Columbia Business Times (CBT) called it.    Katy Station, Tiger Hotel, Bleu -- the venues change, but the goal is the same: gather to make policy with the city manager, sometimes the Mayor, and just enough Council people to avoid a quorum -- and Sunshine Laws.  "The group began in the 1920s, and still meets three times each week," CBT reported.

This shadow government is highly-evolved, a century in the making, passing power down through generations like a birthright or inheritance.   It has a history of taking what it wants -- think Land Clearance and "Urban Renewal" in Columbia's black community -- and if you cross it, you're out.

You're off social lists; you're off official invites to participate in "citizen commissions"; you get the cold shoulder at establishment soirees.  And you can lose business, as retired public works superintendent Bill Weitkemper discovered when potential business-owner donors were told not to support his City Council campaign.

The Town Bosses do their best work in the shadows, hiding behind attorneys and LLCs and such.  But the need to hastily cobble together a big-bucks campaign committee to fight new development fees for them (while they, in turn, ALWAYS support higher taxes for us) has brought the Bosses into the light.

10.   Al Price.  Retired banking bigwig who once told Jack Rader's kids to get a job -- and get out of the way of a Boss-inspired scheme to take the Rader-owned Bengal's Restaurant for a new State Historical Society Museum -- using the Bosses favorite tool, eminent domain.

9.   Jeff Smith.   The King of Housing Tax Credits lives right here in Columbia, in an estate that would make a King blush.   Rumor has it one chandelier alone cost $40,000.
Smith builds low income and senior housing around the country, gobbling up taxpayer money like few others.   He exercises his Boss power quietly, showing up on the State Historical Society board and lobbying legislators for his hefty share of crony capitalism.

8.  Tom Atkins.   Owner of the diversified Atkins Corporation and part of the St. Charles Road Development Gang, a group of crony capitalist scofflaws able to demand $50,000 an acre for land in the county boondocks when they sell to Columbia Public Schools and City Hall.
Said land comes complete with city annexation plans, so the gang uses tax and utility rate dollars to run sewers, sidewalks, roads, lights, and other infrastructure at John Q. Public's expense to support nearby new subdivisions, anchored by schools and parks atop that pricey land.   They also get huge property tax breaks from Boone County Assessor Schauwecker in the meantime.  Such a deal!

7.  Bob Lemone, through his family trust.   Builder/developer Bob Lemone died in 2008.  But his Boss legacy lives on through a family trust that's also part of the St. Charles Road Development Gang.   Said to have been so buddy-buddy with City Hall that he could make the impossible happen, with major benefits to himself, of course.

6.  Henry J. "Hank" Waters.    Proving time and again that his pen is mightier than our swords, the Columbia Daily Tribune publisher has used his pen to persuade City Hall to use its pen -- most notably to sign ordinances benefiting his sizable downtown land holdings.   Garagezilla, Land Clearance in the black community, and the land grab scheme for the new State Historical Society Museum come to mind.   Inherited his wealth and power.

5.  Elvin Sapp.   With this King of Big Developers, we enter Boss Royalty -- and one of the hands behind the anti-Development Fee committee.   Tied with his brother Billy on our Boss power list, Elvin Sapp is part of the Emery Sapp and Sons empire, another inheritor of family funds and political sway.   Built Old Hawthorne, and was a major force driving development south of town on the Phillips tract until business acumen got the better of him and he sold much of the tract to other developers.

4.  Billy Sapp.  President of Emery Sapp and Sons, a construction and development giant founded by father Emery and headquartered in Columbia.  One of the forces behind the anti-development fee committee.

3.  Robert "Bob" Pugh.  Former Mayor, MBS Textbook CEO, and the leader of the St. Charles Road Development Gang, Mr. Pugh is reportedly the "brains" behind the city's Boss operations.   "Most of those guys can't take a pi-- without talking to Bob first," an inside source, who has known Pugh since his Mayoral reign, told the Heart Beat.   "He even tells Hank what to write."
Latest brainy creation:  $80,000 anti-Development fee fund.   Pugh did not inherit his wealth, and all signs are he's a savvy businessman with a stubborn streak of crony capitalism.
2.  Bill Laurie.  One half of the Wal-Mart heir duo who sit atop the Town Boss perch, Laurie is best known for sports investments, a big farm on Nifong, his ownership of all the land around the Boone County Fairgrounds, and a roughly $4.5 billion fortune.  Married wisely, to Nancy Walton Laurie,  niece of Wal-Mart founder Sam Walton.

1.  Enos "Stanley" Kroenke.    Boss of Bosses.  Crony of Cronies.  Supreme Boss Leader.   The other half of the Wal-Mart heir 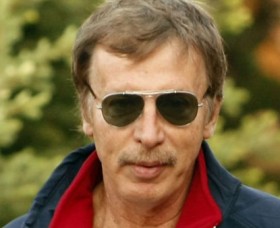 duo who also married into inherited wealth, Kroenke has built a worldwide sports, land, and commercial development empire that makes up his roughly $5 billion personal net worth.
And he lives in Columbia, on the side of Nifong opposite Boss Laurie.   Good indicator of Chief Boss status:  city manager over-ruling City Council on $25,000 fine for development site problems.
Chief indicator of Chief Boss Status:  $309 property tax bill on 133 acres of the primest development land in Columbia, across from his south-town estate and Mill Creek Elementary.


Who did not make our list:
Student apartment king Bruce Odle

These men may have power, but they don't have Boss Hogg Power.