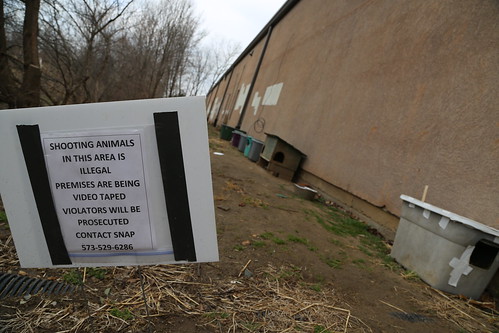 COLUMBIA, Mo 4/14/14 (Feature) -- When the Columbia City Council was considering updates to the animal control ordinance that would regulate feral cat caretakers -- percolating through the city's bureaucracy for about two years -- Spay, Neuter, and Protect (SNAP) leader Christina McCullen offered some financial arguments in opposition.

At a June 2011 Council meeting, she said the city spends about $150 to trap and euthanize a cat, while cost-conscious SNAP volunteers neuter and release for about $60.00.   During public comment, Mayor Robert McDavid, M.D. asked McCullen how many feral cats SNAP had assisted. 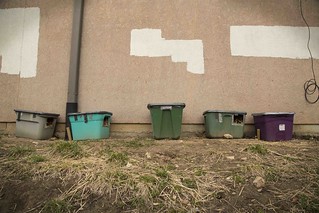 Despite appealing to the city's financial interest -- and offering volunteers experienced in feral cat population reduction -- McCullen failed to persuade.   No one knows how many feral kitties live in Columbia, but a human population of 108,500 could support about 38,000.

Facing such large numbers, McCullen's organization was too small to make a fiscal impact -- or have much political muscle.

Among other hurdles, the volunteer caretakers faced city staff and expert testimony that hurt their opposition to the new regulations.  Michael Szewczyk, a physician on the Columbia/Boone County Board of Health, raised the specter of rabies, one of few illnesses that can spread from cats to people.   Szewcyk told city leaders "cats are the single highest source of rabies in domestic animals, adding that "in Missouri in 2010, while no domestic dog was identified with rabies, cats were."

One cat, maybe. According to the Missouri Department of Health and Senior Services, one c 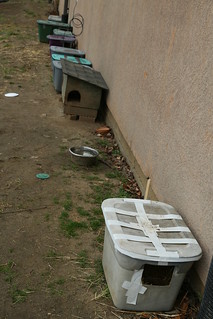 Food and water dishes dot feral cat colony, CoMo, Matt Schachtase of feline rabies was reported in Missouri in 2010.  In June 2011, when Szewcyk addressed the Council, there were no cases of cat rabies in the state, and there wouldn't be another case until May 2013.
Presumably unaware of the state's data, Mayor McDavid and three other council members voted in line with Szewcyk's testimony, passing the stricter legislation for cat caretakers on a 4-2 vote, with one member absent.

In meeting minutes, McDavid explained his vote as a measure of "respect for the Board of Health."

As of March 20, 2014, no one had applied for a feral cat license in Columbia, says Andrea Waner, spokeswoman for the Columbia/Boone County Department of Health.   Asked if lack of public participation was evidence of the law's failure, Waner replied it serves not only as an enforcement tool, but an educational resource. 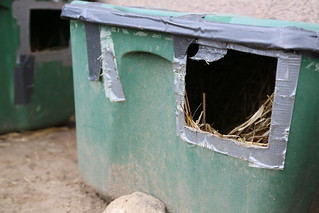 Inside a feral cat pad, CoMo, Matt Schachts, the public health department and animal advocates are both looking out for the welfare of cats, Waner says. "We all want the same thing in the end. It's a matter of figuring out how to get there."

But health department officials may have to "get there" with less and less help from the public.   McCullen almost didn't agree to an interview, joining other SNAP members who prefer to "lay low for legal reasons."  Since the ordinance passed, she's given up on educating city officials, and prefers anonymity to public debate.

"We care for cat colonies within city limits, and so we could be targets," McCullen explains.

SNAP would like the city to loosen the law on caretakers so volunteers without a permit -- most of whom are on limited budgets -- don't face prosecution.  If they help control the feral cat population, less regulation is in the city's best interest, she says. 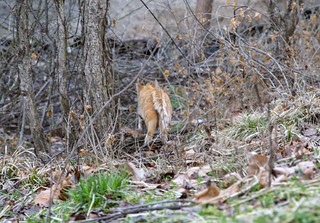 Feral kitty heads into woods, CoMo, Matt Schacht
But Columbia's feral cat ordinance is unlikely to favor volunteers any time soon.   They don't have the numbers or the clout to push back, especially with large financial interests like veterinary Big Pharma behind laws that help sell product.  Annual feline disease tests;  microchips for every cat;  vaccines and immunizations.

The law's requirements add up to big bucks -- and a big burden for caretakers.

Mayor McDavid himself recognized the feral cat ordinance would have enforceability problems, but he doubtless never predicted its zero participation rate and unintended consequences.

It's a humane and simple thing, after all, to leave a bowl of food in the woods for a hungry cat.   Where it gets complicated is watching one hungry cat turn into ten, and realizing that under the law, you can't afford to do much about it.
PART ONE

Photojournalist Matthew Schacht is a Mizzou law school student and former reporter for the Columbia Missourian.  He authored our Stumped series on the loss of Columbia's trees to development.