The unintended consequence of a well-intentioned ordinance -- Part 1

COLUMBIA, Mo 4/13/14 (Feature) -- On a dirt path made solid from foot travel, behind a stucco strip mall in the southern part of town, lies paraphernalia of criminal activity.  The perpetrators are absent, but they've left evidence of their transgression in the weeds and on the rocky banks of an adjacent creek.

We're not talking about drug use or prostitution. The crime is feeding feral cats.  Theperps: volunteers who also perform an important social service at their own expense: spaying and neutering the animals so they no longer reproduce. 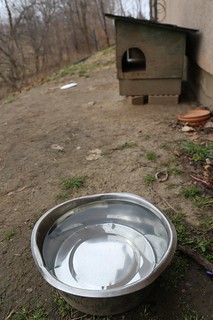 CoMo feral cat caretaking colony Matt Schacht photo
Feral cats are wild versions of the domesticated variety, birthed by stray mothers absent human contact. They fight with domestic pets and become a nuisance when they're hungry or in heat.

Unchecked, feral cats can spread deadly feline leukemia to any cat they contact and send feces into the city's storm water system.   Cats are also about five times more likely than dogs are to contract rabies, according to the Centers for Disease Control.

Voris denied the charges -- that he was pushing the regulations on behalf of Big Pharma -- and the Council adopted the changes.

Before, the ordinance was ambiguous, with language that simply prohibited individuals from "harboring" more than four dogs or cats.

Now, anyone who provides "food, water, or sustenance" to feral cats within city limits must have a permit.  Without it, feral cat caretakers face fines of not more than $1,000 and incarceration not longer than 30 days.

The revised ordinance also requires caretakers to microchip, catch, and test the cats annually for several diseases, at considerable cost to themselves. 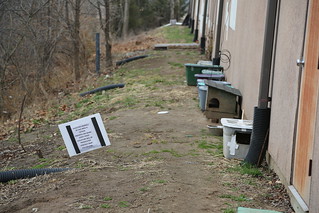 "I think the law was originally designed to stop people from feeding wild cats," says Chris Leach, a veterinarian who once conducted a low-cost spay and neuter clinic near Rock Bridge High School.  "But it's had a bigger effect."

That "bigger effect" includes requirements that set the bar too high for volunteers who donate time and money, says Christina McCullen, spokeswoman for a loose-knit group of volunteers called SNAP (Spay, Neuter, and Protect).

But in Columbia, caretakers cannot foot the bill for the "official" wild cat population control program.  "There's no way our people can afford over a hundred dollars per cat, when all we want to do is fix them so they don't reproduce," McCullen explains over the phone before going to work.