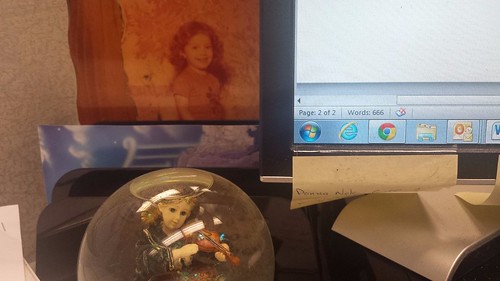 COLUMBIA, Mo 7/8/15 (Beat Byte) -- It's not often you get the opportunity to buy a ghost, but that's what Trib reporter Jodie Jackson, Jr. is offering on eBay.

Jackson's ghost has a name -- Mariah -- and a surprisingly poignant story.

Mariah lives -- or rather, haunts -- a lacquered photo of her when she was about 3 or 4;  and a water-filled, wind-up music globe that plays Beethoven’s Fur Elise (photo).
Both items "moved around with us from about 1995 to 2011," Jackson explains on the eBay listing.   "That’s when my bride (33 years married and counting) insisted that Mariah not come along to our next place."

Since then, she has haunted "a spot on my desk at the newspaper where I work.   But a daily newspaper isn’t the ideal place for her.   She needs a family that will enjoy her antics, mostly manifested by random playing of the music globe."

The globe played a few notes just before midnight a while back, prompting a late night co-worker to insist Jackson "get that thing out of here."

When Mariah was home, she would awaken Jackson in the wee hours of the morning with Beethoven.  "The first time I heard it play, even knowing that I've never wound the music key, I brushed it off," he writes.  "The second time it happened, many months later, I looked on the shelf under the snow globe.  Mariah was smiling at me."
Jackson discovered Mariah at a home he was renting in Jefferson City, in a room just off the "darkest corner" of the basement covered by "a stack of doors and broken storm windows."

"The hidden room was full of more junk – some of it wet and moldy – so I dragged the stuff to the backyard and did my best to burn it."

Amidst the junk were toys and a vinyl ball, hardened with age, that kept rolling -- on its own power -- away from Jackson.  "I tossed a load on the fire and reached down for the ball.  From the corner of my eye, I saw the ball rolling out of the basement again. And did I hear a faint, impish giggle? Nah. I didn’t believe in that kind of stuff."

In a last box filled with "mildewed little kid clothes, baby clothes, rattles and other junk...a face stared up at me from the photograph of a little girl flashing a wonderfully mischievous smile.
The photo was sort of pasted onto a wooden plaque and had been laquered to preserve it.  I carefully pulled the plaque out of the box and turned it over: 'St. Cloud, Minnesota. 1977.'"

Jackson's next-door neighbors Pat and Selma, "two of the most sweet, likeable people I ever knew... the grandparents that I never had," remembered a little girl who once lived in Jackson's house.

"Pat was a sensitive old soul and his hand shook when he wiped away the tears that came.  'Little girl died," he said with sorrow that seemed fresh and raw."  Her death was about 20 years ago -- 1977 or 1978 -- and her family had "moved from somewhere up north."

Jackson later showed them the lacquered photo.  "Oh!  Well, that's her," Selma exclaimed.  And they recalled what they knew about her passing.  "The little girl got sick; no one could figure out what was wrong; it all happened very fast, as if one day she was outside playing, laughing, cutting up -- and a few days later she died."

The girl's family vanished, leaving everything behind.

Pat and Selma couldn't remember the girl's name, so Jackson gave her one of his own.  "I've always liked the name 'Mariah.'  To me, the little girl looked like a Mariah."

Mariah would move with the Jacksons from Jefferson City to Harrisburg to Clark to Columbia, "impish antics, unexplained noises," and of course, Beethoven, following.

"I intended to give Mariah a fresh start – some place other than a busy newspaper office – a few years ago," Jackson writes.  "Now is the time."