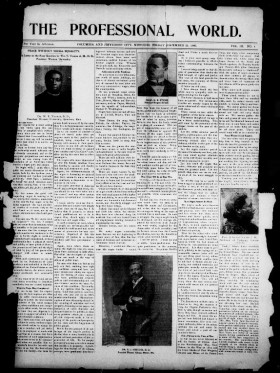 COLUMBIA, 9/28/12 (Beat Byte) -- In a digital look at local history from 111 years ago, the Library of Congress (LOC) and National Endowment for the Humanities (NEH) feature an astonishing online collection of The Professional World, one of nation's first black newspapers and the most important written record of Columbia's African-American community at the turn of the century.

The LOC-NEH collection includes 103 issues, dating from Nov. 1, 1901 to Dec. 25, 1903.   The online viewer includes tools for magnification; use of pointing device to move through the pages; and downloadable PDF versions.  Some issues are clearer and easier to read than others.  In later issues, as photographs appear, the images and ads are striking.

Created and edited by Rufus L. Logan from roughly 1901-1909, The Professional World boasted influential subscribers from both the black and white communities, including prosperous black professionals; the MU president; and the dean of the agricultural college.
The newspaper featured story after story about black administrators, physicians, educators, attorneys, business people, politicians, and philosophers.  It also included a society page that covered such events as a local black doctor’s appointment to the Republican National Convention; the success of a Black-owned moving and transfer company; Blind Boone performances; and visits from Booker T. Washington.

A long-time Washington admirer, Logan tried live the famed educator's ideals, founding a Black-owned grocery that repatriated its profits to the community.   He also ran ads promoting the only "all-Negro subdivision" in Columbia’s history, between North Garth and Third Streets.

The Professional World is also kept on microfiche at the State Historical Society of Missouri.   Subsequent newspapers targeting Columbia's black community have included The Trumpet and the Douglass Neighborhood News.

(Be patient. Images load gradually. You may have to click pages a few times to avoid server failures).