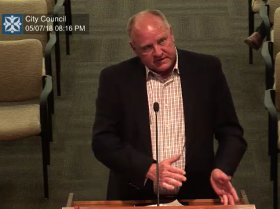 Parmley testified before Treece and the City Council about his second Tax Increment Financing (TIF) package May 7.

Parmley wanted to dissolve a  so-called "clawback provision" that would allow City Hall to rescind the $4 million incentive should he fail to meet promised job figures.
TIES occurs when developers are so used to getting tax incentives, they expect them -- even when they renege on incentive-based promises, like job numbers.
Treece questioned Parmley and lawyer Robert Hollis about reneging on their jobs promise.  Parmley earlier received $3 million in a first TIF package to build the Broadway Hotel based on similar representations.  But this time, he argued the promised jobs numbers would devalue the TIF in the eyes of his bankers.
But you promised...

"You told us you were creating thirty seven permanent jobs with a $19 million annual payroll," Treece said, referencing a Powerpoint slide Parmley presented at an earlier public hearing.
"Did I say permanent?" Parmley asked.  "In terms of jobs, did we say permanent?"
"Yeah, you did," Treece replied.

"I'm sure you've done your homework, Brian.  But it's certainly not a TIF requirement, I don't think, by the statute," Parmley said.

"You said a $19 million payroll for thirty seven full-time employees," Treece responded. "You said permanent jobs."
"That's fine.  I believe you," Parmley said.  "Like I said, I'm sure you did your homework. You always do.  I just didn't look at it like that."
TIES that bind

Treece with Powerpoint
"Anymore, these guys act like they have most of the Council in their back pockets," an observer said after the Council hearing.  "It's like they expect it, so who cares what they promised in order to get it."

Over the objections of every group in town, the Council earlier approved Parmley's second TIF for the flimsiest of reasons: worries that dog poop, spent condoms, and empty beer bottles could blight his property.

They excused his promise of several dozen full-time, permanent jobs at the May 7 hearing by a 6-1 vote, with Treece dissenting.

Even the Columbia Daily Tribulation, which never sees a corporate welfare check it doesn't like, managed to squeak out a weak condemnation, calling the clawback "barely a cat scratch."
Ungrateful grousing?
Despite receiving millions of dollars from local taxpayers, Parmley seemed agitated and antsy at the Council hearing. 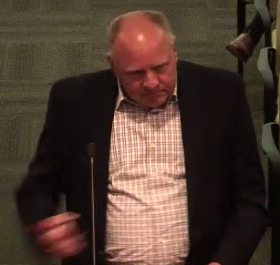 Parmley punching
The first TIF, he said, was worthless to the banks he approached for additional financing.

"They basically laughed at me," Parmley said.  "I was really dismayed...It would be usury rates to loan money like that.  You'd have to get Guido to loan the money."

He also griped about the 2008 recession, accusing the City Council of conspiring to compound his problems if a recession were to recur.
"We were barely hanging on by our teeth.  What the suggestion here would be is that when we're down during a recession, barely clinging on, you'd give us a further punch in the gut," Parmley said, illustrating with his fist.  "Maybe that's what you want to do.  I don't know."
Parmley concluded with an unusual remark about the second TIF.

"I expected to see something along the lines of previous agreements," he said.  "Why now the cheese is being moved, I don't know.  We might know why.   Anyway, do what you want."