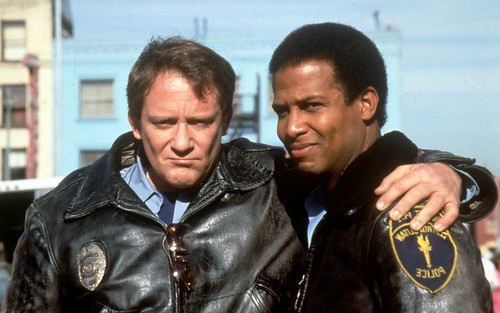 Yes, Virginia:  There are good cops

COLUMBIA, Mo 8/20/15 (Op Ed) --  From #BlackLivesMatter to Columbia's own Darren Wilson Day, American cops are under public relations assault like never before.

No question:  there are bad cops.

But as a Columbia resident for 18 years, 12 years as a property manager in the central city, I've had lots of positive experiences with the Columbia Police Department (CPD) -- so many, in fact, that twice I named them one of the top ten things City Hall does best for the Columbia Business Times.

My wife and I also nominated now-retired CPD officer Tim Thomason for the Ed Robb Public Service Award, which he won.  And Zim Schwartze -- one of my favorite veteran CPD officers -- was a classy trooper from beat cop to captain.

I'm a white guy and so it's hard to compare my experiences with minorities, especially in the black community.   But I have personally witnessed white police officers treating white and black Columbia residents with courtesy, restraint, and professionalism under trying and stressful circumstances.

Herein some stories of good cops, personally witnessed by yours truly, according to type of dispute. 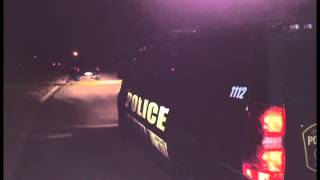 Property management is one of the toughest gigs going.  As Columbia Realtor Delton Jacobs once said, "if you're not careful, it'll take a leg off."    Things can get ugly quickly, especially with evictions.   Cool-headed police officers and Sheriff deputies can really turn down the heat.

1)  The Case of the Tenacious Tenant.   Call to Columbia's non-emergency number brings CPD officer in about 15 minutes.

A buddy of mine has a signed eviction order and wants to know if he can re-enter his rental home and put the tenant out himself.   His attorney has advised otherwise, but buddy is justifiably impatient.   The renter refuses to leave and is several months behind in his rent (it takes a long time to get an eviction order).

Police officer urges restraint:   the only legal course of action is to wait until Sheriff's deputies execute the eviction order, physically showing up at the home to put the tenant -- and his stuff -- on the curb.

Ethnicity of players in this drama:  White.

Wow!  The place is a disaster.   The guy and his girlfriend have been raiding dumpsters all over town, filling the house with everything from filthy clothes to broken TVs.   Takes nearly a week to clean up.   Sheriff's deputy, meanwhile, is the picture of calm while the evicted tenant is a belligerent, loud-mouthed jerk.

3)  The Case of the Renter's Retribution.   Tenant moves before being evicted for non-payment of rent, but returns to vandalize the property.   Neighbors notify property managers (PM), who arrive and call the police.  Officers respond in less than five minutes.   PMs decline to file charges, but police courteously and firmly notify former tenant that he will face arrest for trespass if he returns.  They urge everyone to calm down, take it easy, and take off before things escalate.

Ethnicity of players in this drama:   White.

No matter how hard you, as a landlord or renter or homeowner, try to do the right thing, these ass hats -- from drug dealers to whack jobs to slumlords -- try to pull you down.

Cooler heads in law enforcement are a godsend when neighborly relations turn sour.

4)   The Case of the Next Door Nutcase.   Crews mowing lawn on vacant lot invariably bring out old man with strange propensity to yell the F-word and make threats.

Screaming "I'll kill you.  I'll fuckin' kill you," prompts 911 call that brings an officer in under five minutes.

The veteran cop politely asks the man why he's upset.   The garbled explanation has something to do with bushes he thinks are overgrown near his yard -- and a renewed threat to harm the lawn crew if they didn't cut them back.

The officer talks and explains, cajoles and negotiates, never raising his voice, never intimidating or rude.   The crazy neighbor gradually backs down and after several minutes, returns to his house.  The officer departs.  The lawn crew finishes mowing.

Ethnicity of players in this drama:    Black, White, Hispanic.

5)  The Case of the Slumlord's Piano.   Dispute breaks out after tenants push a dilapidated upright piano -- that's right -- into a neighbor's yard on moving day.   Wheels are broken, and piano weighs a ton.   Well-known slumlord arrives as chagrined neighbors are moving piano back onto his property.   He calls the police.

Two officers arrive and spend about 15 minutes calmly and politely gathering facts.  They determine that neither party should move the piano any farther, and that any dispute related to it "is a civil matter."

Piano sits on slumlord's property for several months, in snow and rain -- that's right -- until one spring day it finally vanishes.

Ethnicity of players in this drama:    White.

6)  The Case of the Abandoned Autos.    More than once, someone has abandoned an unlicensed car on property I own.

A call to the police non-emergency line brings "community service" officers, who tag the vehicles for towing after 72 hours.   Sometimes, the tag itself works and the car's owner removes it.  In other cases, a towing company takes the vehicle at the car owner's expense.  In every case, this nuisance is resolved without a hitch.

7)  The Case of the Paranoid Pesterer.     New next door neighbor with bizarre obsession over property lines erects unnecessary "No Trespassing" signs across property, threatens surrounding neighbors with lawsuits, and emphasizes she has "a gun hanging on the wall" in her house.

Police become regular visitors to this situation, which stresses out the street, a formerly quiet place where everyone -- old and young, black and white, students and workers -- gets along.

Officers are polite, cordial, respectful, listening carefully and trying to negotiate both sides of whatever the woman's dispute du jour may be.   CPD shows up in the heat of the latest travail; and leaves with each side quietly returning to its corner, to fight another day.
Ethnicity of players in this drama:    Black, White. 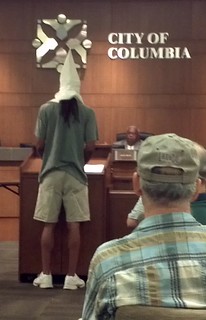 8)   The Case of the Black Klansman.   Columbia's own Marlon Jordan, who may be the world's only black Ku Klux Klansman (it's a statement), appears on a central city street in Klan regalia to film officers responding to a domestic disturbance.

Mr. Jordan taunts and shouts, but the officers remain calm, refusing to take the bait.   It's quite a sight:  squad cars along the street, cops assisting an apparently battered woman screaming profanities, and Marlon the one-man film crew.  I watch, but the police do their best to stay calm and look away.

Ethnicity of players in this drama:    Black, white.


9)  The Case of the T-Boned Trucker.   Friend gets into an injury accident when a car fails to yield and hits his pickup truck.   We'd plan to meet, and he calls me after the wreck.  I see the car, almost ripped in half, and my friend, bleeding and shaken, sitting in his truck as police and fire rescue crews clean up.

Repeatedly asking him if he's all right, injured, etc., officers -- including Thomason -- do a sobriety check (everything okay); arrange towing; direct traffic; and stay calm.

The car's drivers are badly injured, and officers examining them see ugly, life-threatening injuries.   It's hot on this busy intersection, sun beating down on the traffic and the asphalt.  But slowly, calmly, and professionally, the firs 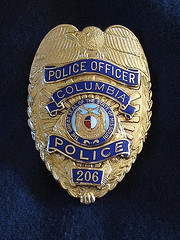 t responders pick up the pieces.   Everyone survives.

Ethnicity of players in this drama:    White.

10)  The Case of the Curious Kids.  Group of neighbor kids who love to wave and smile at traffic get passing squad cars to pull over and chat.

What's this?  What's that?  How do you make the siren sound?  How do you turn on those lights?  Who's on the radio?  What's that computer tell you?  Working outside, I overhear the questions, and watch CPD officers patiently answer and engage.   The kids are black, maybe around 8-10.  The officers are white, male, female.

So Yes, Virginia:  There are good cops.  Despite the news about bad policing, poor command leadership, and the frat house environment at Kappa Kappa Cop -- aka, the Columbia Police Officer's Association Facebook page -- good cops aren't fiction or fairy tale.

They're fact.  If we want more of them, we have to demand more from their leaders, who oddly seem to escape most of the blame for policing failures.