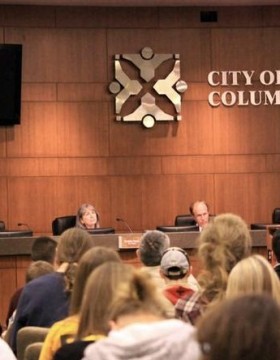 Lots of new voices speak out against blight
COLUMBIA, 4/20/12  (Beat Byte) --  "It is far too damaging for our community to be labeled in this way, and part of what is so painful about the EEZ process," Columbia resident Lucille Salerno told Columbia City Council members Monday night about their Feb. 6 move declaring 60% of Columbia blighted.   "I don't mean to make this personal, but to designate my home as part of a 'blighted community' really got me motivated."
Salerno joined nearly three dozen other citizens who took to the Council podium in a rare showing of People Power to express their consternation over two recent City Hall decisions:  the Blight Decree and an unannounced move to cut down eight mature trees on Westwood Ave (related story to follow).
Few times in local history has public commentary at the end of a Council meeting doubled the length of the meeting.   Monday night was one of those times.    With several new voices, there was no calling this a meeting of the "usual suspects," a favorite pejorative of those in Columbia who oppose transparency in government.

"REDI did not provide you with good service when they originally presented this to you," Jack Meisenbach, president of the Old Hawthorne Vistas Subdivision Homeowners Association, told Council members about the Enhanced Enterprise Zone (EEZ), which requires a blight designation.  "There was no discussion of blight.  It was left as a footnote and the blight designation was done without public input."
Meisenbach also worried that REDI -- a City Hall department that doubles as a business lobby -- was using 12-year-old census data, and that blight would have an adverse impact on property values.   "You need to remove blight," Meisenbach urged.

Building contractor and rental property manager Michael Jones, who moved here from Denver, Colorado in 1977, said he "fell in love with Columbia," and was worried about the impact blight would have on property values.   Council should "concentrate on more important things, like the police department and these little 15-20 olds who are shooting up the city," Jones said.  "I'd much rather see you concentrate on these issues rather than blighting my property."
A Rolla resident for 40 years, "35 as a business owner," newly-relocated retiree and Vanderveen resident Roger Smith said he, his wife, and sister came to Columbia thinking "it was a great place.  We still think it's a great place, but all of a sudden this blight designation came along.  I looked up the state statutes on it and the definition is kinda scary."

His first time testifying before the Council, Smith said that "blight definitely takes away from property values.  It has to.  I've got a lot of my neighbors in Vanderveen who agree with me."
Then Smith dropped a bombshell, firmly disputing REDI arguments that Rolla accepted blight and EEZ programs with open arms.   "Most of the people I know down there, including the business people, do not like this EEZ designation at all," Smith said.   "It attaches too many strings to private property from people who shouldn't be" attaching them, "and certainly makes a difference in what property you've got."

Smith's explanation of Rolla's resistance is supported in this article about "sloppy flaws" in the Rolla/St. James/Phelps County Enhanced Enterprise Zones.

Writer and artist Gladys Swan told Council members that after listening to all the presentations, "it seems to me that what we need is some larger vision of what this community ought to be."   She urged the Council away from economic programs with "questionable returns" and tax abatement schemes that take resources from schools, and toward the creativity and intelligence of Columbia's citizens "to solve some of our problems."

Lack of public participation in the EEZ/Blight Decree concerned Justin Thomas, who compared it to the formation of the Citizens Police Review Board, a long process that involved plenty of public participation.  "I'm here to fight the blight," he said.
Columbia's recent selection as the #1 Most Hardworking Town in America by Parade Magazine struck Dean Anderson as oddly ironic, given REDI's big push for big business tax abatements.   Schools, parks, easy commutes, and the other amenities that make Columbia vibrant require support, especially from tax dollars.
Why, Anderson asked, should businesses come to town on a promise that they won't have to pay their fair share for the very amenities that make Columbia's workers the "hardest working people" in the nation?   "If the businesses you want to bring here can't contribute, we don't need them," Anderson said to applause.
With two sons at Mizzou and Rock Bridge High, Judy Doyle said she had "no intention of speaking," but wanted to support efforts to rescind the Blight Decree and EEZ.  She urged Council members to do both, and thanked Fifth Ward Councilwoman Helen Anthony for her efforts (story to follow).   "I know it's hard to stand up sometimes," Doyle said.
She also referenced comments by Tyree Byndom about the black community, where blight was used to justify eminent domain abuse 50 years ago.  "Tyree mentioned conversations going on around the dinner table in the black community," Doyle said.  "Those same conversations are taking place around dinner tables in the white community, too."