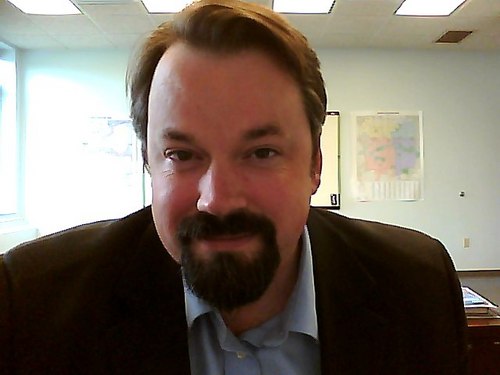 A City Council discussion becomes painful to watch as city manager steps way out of line
COLUMBIA, 4/15/12  (Op-Ed) --  For inappropriate and condescending behavior, April 2's Columbia City Council meeting has been the talk of City Hall watchers for the last two weeks.

In an unprecedented example of legislative over-reach, city manager Mike Matthes literally shut down a formal motion 5th Ward Councilwoman Helen Anthony introduced rescinding the City Council's Feb. 6 certification of a map that legally blights 60% of the city and parts of Boone County.
"I think we should rescind it now, the blight designation, and have a separate hearing on it," Mrs. Anthony urged, following earlier concerns by 6th Ward Councilwoman Barbara Hoppe.  "I'd like to make a motion," she says, at 2:34:30 in this meeting video.
"We have a Motion to Rescind," Mayor Bob McDavid acknowledged, with both Mrs. Anthony and city attorney Fred Boeckmann offering further clarifications.
Then, the Rules of Order used to govern legislative debate broke down.
"Can we take this as a request for staff to come back on that issue and really research the impact of that?"  Matthes interrupted, substituting a "staff report request" for Mrs. Anthony's Motion to Rescind.  "Certainly not pushing back, but just want to know exactly the outcomes," Matthes said.   "We'll come back in the next meeting with a report."
The report -- prepared by REDI, the City Hall department that doubles as a business lobby -- is a lukewarm rehash that offers no new information.
Matthes' interference with the legislative process was the topper of a half-hour debate about the Enhanced Enterprise Zone/Blight Decree that saw him and Dr. McDavid repeatedly interrupt and dismiss Mrs. Anthony with a "don't worry your pretty little head" approach that substituted their impatience for her due diligence.
"We summarily declared quite a large swath of our city blighted without any kind of public hearing or discussion," Mrs. Anthony insisted.   "I think the process was backward."
But the Mayor insisted it was all just "preliminary," and the word blight "just semantics."
"We were very clear...when we certified the area as a blighted area," Mrs. Anthony countered.  "I think we

certified a blighted area at our prior meeting.  I don't see it as preliminary.  I see it as a done deal," she said.   "We've really not done a good job in terms of process."
"I agree with Ms. Anthony looking at the language of the statute," Barbara Hoppe added.   "It says the area described is hereby certified as a blighted area so I don't understand how you're interpreting that to be preliminary.  Right now, this is what stands."
"Have we certified a map?"  Dr. McDavid asked.
Yes, Boeckmann said.   And what's more, "blight" is not mere semantics.   "The statute says you have to blight the area, and there's an extensive definition of blight," he explained.   "I think you'd have trouble upholding most of the area as blighted."
"I would think that would lead to us wanting to rescind it," Mrs. Anthony said.  "I'm arguing the process part of it -- that we haven't given the public an opportunity to be heard."
Dr. McDavid disagreed.   "I thought we were having the public discussion now," he said.  "We're going to have a three- or four-hour public hearing.  We'll discuss eminent domain abuse.  We'll discuss harm to the public schools.  It would be very easy to rescind any language we want."
Dr. McDavid also dismissed concerns Councilwoman Hoppe raised about blight's impact on property values.  "Several realtors have worried that they would have to disclose that this is a blighted area," she said.
"Look, there are 118 or whatever of these EEZ zones," Dr. McDavid retorted.  "All of Kansas is blighted.  It either lowers property values or doesn't.  So far, nobody has told me that it does, but I'm willing to listen.  I'm waiting for somebody to tell me that it does."
So, are the people expressing this concern "nobodies" in Dr. McDavid's mind?
Rather than take the two Councilwomen seriously himself, Matthes blamed Columbia's "overly-engaged" citizens for undue protesting in an "aw shucks" speech about how REDI did everything right and Columbia is too abnormal to see it.

"The rules have been followed, but Columbia's different I've learned," Matthes said.  "We tend to approach things with a lot more public input.  We have a lot of engaged citizenry.  I joke with my city manager colleagues about citizen participation.  They work very hard to try and drum some up.    We do not have that problem.   And that's a wonderful thing."
Besides, he told the Council, "all of the decision-making comes back to you before it goes to the state."
Then, stunned silence after Third Ward Councilman Gary Kespohl asked city clerk Sheela Amin what she sent to the state two months ago.  "Our initial resolution said 'directing the city clerk to send a copy of the map and the Resolution to the to Department of Economic Development.  Did you send the map?  Did you send the map and the Resolution?" Mr. Kespohl asked.
"I did, like the next day.  That entire thing,"  Amin replied.
Uh oh, the silent looks seemed to say.   But the Mayor still refused to acknowledge the done-deal situation.  "Can we agree this is an informational issue?"  he said, moving right along to the next item.
VIDEO -- Sections REP56 and REP57
http://gocolumbiamo.granicus.com/MediaPlayer.php?view_id=2&clip_id=604