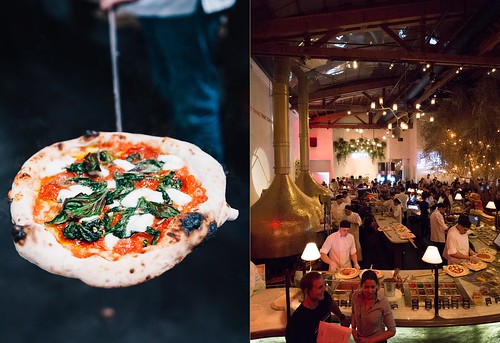 Wood-fired baking for the lightest crust ever

But for pizza aficionados or folks who just love good food, MidiCi's Neopolitan pizzas are a great alternative.   Where Shakespeare's crust and toppings lean heavy, MidiCi serves an air-light treat baked over a wood-fired oven.

The wood-fired effect is a crust more like fresh bread than pizza dough, a hallmark of the pizza-making tradition known as "Neapolitan", which means of or from Naples, Italy.

"The moisture and aroma of the wood allows the crust to maintain its internal softness, as well as ensuring large bubbles inside the dough, and the typical aroma of cooked bread," MidiCi's website explains.

On a lovely late afternoon a few weeks ago, my son and I were drawn to MidiCi's urbane setting at the corner of Broadway and 10th Street in downtown Columbia.

The building itself -- a new low-rise apartment with MidiCi on the ground floor -- is everything local residents have wanted in new urban development.   A line of tall, glistening windows invites pedestrians at the sidewalk level to glance in, at a busy crew of chefs and servers working an open-air kitchen.

Warm potatoes, fresh rosemary and gorgonzola make Rome's Pizza the "hallmark pizza flavor of Rome, Italy," the menu explains.  My son's a finicky eater, so when he ate every wood-fired crumb, I knew we'd found a winner.

I ordered the Truffle & Prosciutto Di San Daniele Pizza, which had the lightest crust and best-seasoned prosciutto -- a thinly-sliced ham -- I've ever eaten.   Turns out I wasn't imagining things.


Prosciutto di San Daniele hams are produced only in the northern Italian province of Udine, with no additives or preservatives of any kind, and minimal processing, Midici explains.
I noticed the term "Made with 00 Flour" on the menu and suspect it contributes to the lightness of the dough.

"Caputo 00 flour is ideal for pizza dough for two reasons: one, it’s finely ground, and two, it has a lower gluten content than most flours," the company websiteexplains.  "The 00 refers to the texture of the flour:  Italian flours are classified by numbers according to how finely they are ground, from the roughest ground 'tipo' 1, to 0, and the finest 00."
MidiCi also offers a variety of salads;  gelato and other traditional Italian desserts; and a special nosh, four varieties of Burrata, an outer shell of solid mozzarella filled with cream-soaked mozzarella.

Most online reviews are trending favorably.   Google reviewers have given MidiCi a 4.9/5.0 rating and had this to say:


This is the best pizza in Columbia, hands down.  -- Kevin McGree


This place was wonderful!! First time there and the food AND drinks were AMAZING. Seriously, everything was delicious. We had the Devil's Pizza and the Meat & Cheese board. Soooo good! The atmosphere was beautiful, even the bathrooms were AWESOME! -- Kristina Stewart


My girlfriend and I love this place.  Very close to pizza in Napoli, Italy.  Been here mutliple times since they opened.  -- Edward Kim
Interesting decor, good ingredients, solid beer list.  Price is a bit high for downtown Columbia, and not my favorite style (a bit too thin, but the crust is light and airy).   Won't overtake any of my regular pizza stops, but nice addition for those who are into what it's trying to do. -- Tony Mullen
Midici's is one of a kind with a unique and eclectic vibe. Every item we tried on the menu was beyond delicious and totally unlike anything in the area (including St. Louis where I'm from).  -- Caroline Jaycox